ARE YOU LOOKING FOR A CHART LIKE THIS
(or the definite articles version)?
IF SO, YOU’RE LEARNING IT WRONG. 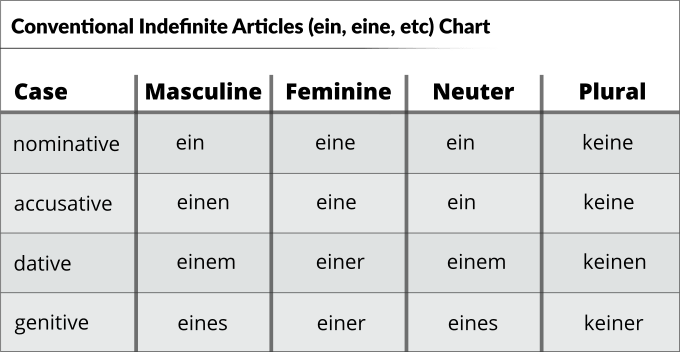 GO STRAIGHT TO THE CHART SECTION
OR
START HERE:

(And before you question if I actually speak German because of the inclusion of the plurals column with the forms of ‘kein’, just keep reading!)

It felt so exciting – all the traveling you’d do, the new experiences you’d have, being able to talk in another language (<– COOL!), and all the opportunities that would come your way.

But then came all the ‘fiddly bits’ of learning a new language.

Why does grammar always have to sound both so intimidating and also boring?

Well, although I’ll do my best, I’m not sure anyone can make grammar super-duper fun … but I do promise that I can help with the intimidating part!

In fact, below I’ll show you shouldn’t even think about definite and indefinite articles.

What You Need To Know

Definite articles is “grammar-speak” for ‘the’.

That’s right. Definite articles in German are just the collection of different ways to say ‘the’.

Indefinite articles is “grammar-speak” for ‘a’ — all the different ways of saying ‘a’ in German.

What do I mean with “all the different ways to say …”??

How to say ‘the’ and ‘a’ changes based on the gender & caseof the noun that follows!

What are the definite articles?

Have you already seen this chart?

This is how the definite articles are conventionally taught.

The way you say ‘the’ changes based on the noun’s…

What are the indefinite articles?

Similarly, the many ways of saying ‘a’ in German are usually taught with this chart:

You can see how these indefinite articles change — just like the definite ones — based on the gender & case of the noun they are preceding (coming in front of).

(NOTE: of course, one can’t say ‘a / an’ in front of a plural noun, but I’ve included a plurals column with the word ‘kein’ [not any] so that you can still see the declensions in the plural. You could insert a ‘k-‘ in front of any form of ‘ein-‘ in the rest of the table to have the correct form of ‘not a / an / any’ for the other genders / cases!)

As you’ve gotten a taste of with the conventional definite articles and indefinite articles charts above, traditionally, German students are introduced to lots and lots of separate charts for all the various words that come in front of nouns (the technical term for these words is modifiers).

You’d have all these charts thrown at you:

So, imagine the two conventional articles charts from above … but with another 8 charts on top of them with just itty bitty changes that somehow you have to remember.

Are you feeling overwhelmed yet? I hear ya.

The good news is that all these charts have much more in common than not.

That means that it’s possible to combine them all and just mention a handful of special exceptions. All our bases are covered and you’ve got a solid foundation in German that doesn’t involve 10 mind-numbing, overwhelming, unnecessary charts.

First, compare the definite & indefinite articles charts to each other. Can you see the similarities and differences? 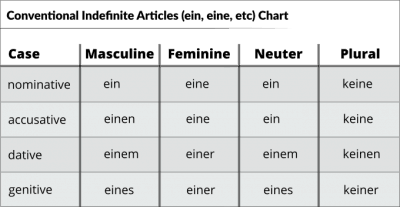 There is much more that the two conventional charts (and the other 8 I mentioned!) have in common than not — that’s why we can combine the charts into one that simply has 3 exception spots. 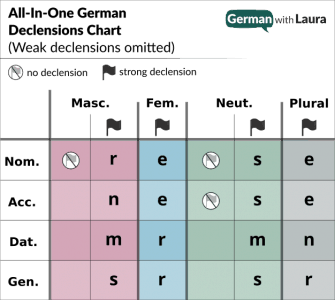 The All-In-One Chart overlays them both!

in the All-In-One Chart. COOL!

What about our 3 exception spots when dealing with indefinite articles?

Those are taken care of, too! There is a

How exactly to read & use the All-In-One Chart will be covered in depth below. Keep reading!

Whew. I’m so glad we got to this part. I hate talking about definite and indefinite articles.

To talk about definite and indefinite articles is to categorize things all wrong!

I’m pretty sure you’ll have no problem remembering how to say ‘the’ (e.g. der, die, das) and ‘a’ (e.g. ein, eine, etc.) in German. But there’s absolutely ZERO reason to remember the grammar-speak terms.

German is complicated enough if we just say focused on what you need to know!

And you need to know that it’s sooooo much better for you to learn about determiners.

Determiners is a big, overarching category that includes both definite and indefinite articles plus a bunch of other words that all function within German the same way.

Determiners are all sorts of little words — like some, many, a few, every, not any, this, and that — that tell us how many or which one.

Example: Which apple? This one? Or that one?

In German, all those italicized words (determiners!) take slight changes called declensions that vary dependent on a host of factors (<– we’ll totally unpack this soon)

The words that come in front of nouns need declensions.

There are two types of words that come in front of nouns: determiners and adjectives (but adjectives are for another article).

Determiners are split into two groups: ein-words & der-words. And this distinction is worthwhile (you’ll find out why later)!

Tip: if the determiner is not an ein-word, it’s a der-word by default.

There are 2 types of declensions:

All the bolded declensions in the above examples are strong declensions:

In a very limited number of instances, there might also be no declension at all (keep reading!)

Coming up, after we talk about how to use declensions with the same All-In-One Declensions Chart you discovered above.

This section is all about using our handy-dandy All-In-One Declensions Chart. Here we go!

How to Use Declensions

To properly use declensions in German, you need to know the following:

If you can answer these questions, you will always know which declension is needed on each determiner and/or adjective.

How to Know the Gender of Any German Noun

One way to wrestle with German noun gender is to simply memorize every noun connected with either der, die, or das so that you (hopefully) remember what gender that noun has:

BUT there are some clever shortcuts that can save you a lot of time.

German noun genders are determined by either by group or by form.

The end of nouns, or, the suffix is what determines the gender of the noun.

There are certain suffixes that are almost exclusively masculine, feminine, and neuter.

How to Know Which Case to Use

The case of each noun in a sentence indicates what role it is playing in the sentence and therefore also shows its relationship to (i.e. how it’s interacting with) the other nouns in the sentence. 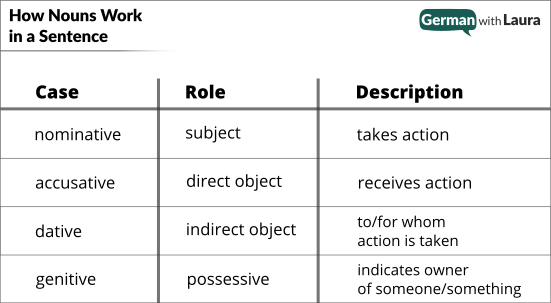 Think of the four cases as ‘slots’ in a sentence that we must/may fill up with nouns.

The general rules of thumb are:

In this guide, we are focusing on determiners (we talk about adjectives here).

All you need to know about the declensions determiners need is this:

ALL determiners will ALWAYS take the strong declension…

Except … if you’re using an ein-word determiner (do you remember this distinction from above?) with a noun in the:

Only ein-words only in these 3 spots behave differently by taking no declension.

This graphic shows you what I mean (and gives you a sneak peek into how adjective declensions work, too!) For info on declension patterns #3 and #4, read my Declensions Guide.

for the strong declensions, the

for the weak declensions, and the

for the no declensions! (<– keep reading for the full explanation!) 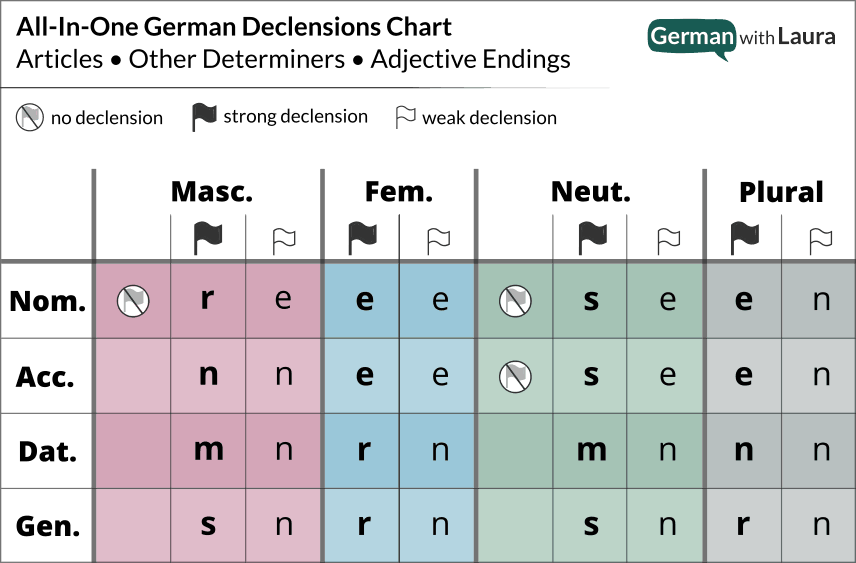 Working with the All-In-One Chart is all about learning German smarter, not harder.

Again, if you know your noun’s gender & case and whether you’re using an ein-word in one of the 3 exception spots, you will always know which declension your determiner needs.

REMEMBER: Determiners always use the strong declension unless the determiner in an ein-word and it’s being used in the masculine nominative, neuter nominative, or neuter accusative.

Here, again, is the abbreviated chart (no weak declensions listed). For the full chart and how to use it, read my guide on declensions.

Because the All-In-One Chart replaces not only the definite articles chart and the indefinite articles, but also a whopping eight additional charts, we have to boil declensions down to their very basics.

And the basics is this: the very last letter.

That is why the All-In-One Declensions Chart has just one letter in each spot.

What you need to remember is: almost always add an ‘e’ in front of the listed declension.

For a complete discussion of this point (and its exceptions), read this guide on declensions!

All right. Let’s put this into practice. I’m going to now …

Find the right area of the chart:

The ‘root’ of the determiner ‘the’ is just the letter ‘d’! All the ways of saying ‘the’ in German start with ‘d’ and end with a strong declension. The vowel in the middle is usually an ‘e’ (but sometimes an ‘i’ or ‘a’ as in die and das. Read more here.)

Since we’re working with a neuter noun and we want to say ‘the’, we need the word das. So, this is one of our exceptions!

We take the ‘d’, tack on an ‘a’ (<– breaking the standard ‘e’ rule), and then sandwich with the provided strong declension (-s) because …

Remember: Except in 3 instances, we have to always take the strong declension first.

So, we need das for ‘the’ in this neuter accusative example.

Now, what if we want to say a child — still in the accusative case?

We’re still working with the same section of the chart. But! Now we’re using an ein-word! And neuter accusative is one of our 3 exception spots.

Do you see the no declension

listed as an option? That’s what we need!

As we talked about in part 1, the determiner will always take the strong declension except in three special instances.

If we have an ein-word determiner (ein, kein, irgendein, possessives) in the masculine nominative, neuter nominative or neuter accusative, we will put NO declension onto the determiner!