Are you tired of sounding like a 7-year old learning how to read?

Working on using pronouns to replace nouns can really bring your German up to the next level.

Frank has a dog. Frank likes his dog. The dog likes Frank. ← Yikes.

Your German will sound more authentic if you don’t repeat all those nouns, but use pronouns instead (e.g. Frank likes him).

Learning what the German accusative pronouns are is pretty simple … learning when to use them … well, I’m going to try to make that as EASY as possible.

Section 1: The Basics
What you need to know to start getting the hang of German Accusative Pronouns

If you’ve read my overview guide on Personal Pronouns, you know that pronouns are little words that replace nouns or entire noun phrases, e.g.

Especially when you’re replacing a LOT of words, pronouns come in very handy!

Good News: for the most part, English & German pronouns are more similar than different.

Both languages have pronouns such as I, you, he, she, we, they, us, me, him, etc. And both languages use them the same way (to replace names, nouns, and noun phrases).

There are a handful of ways that German pronouns are trickier than English ones. For starters, German has a whole additional category of pronouns than English does (I’ll show you what I mean in a bit).

First, we have to quickly lay the foundation with nominative pronouns.

German & English both have nominative pronouns or ‘subject pronouns’. Here’s a look at them side-by-side: 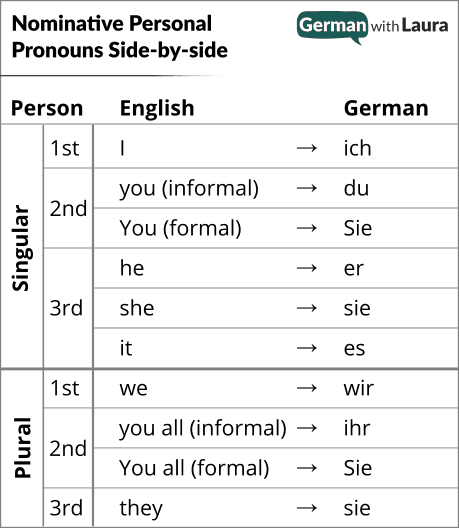 Hopefully, nominative case pronouns are making sense. Now, you’re ready to talk about the difference between nominative and accusative pronouns (that’s why you’re here after all!)

Answer: the direct object of the sentence.

Yeek. If that suddenly makes your blood run cold (it’s 5th English class all over again … RUN!), you’re not alone. Let’s quickly break this down by looking at the case and role that nouns (and pronouns) can have:

Now, read these sentences with direct object pronouns (only English examples for now!):

OK, all of that is not so bad! Choosing nominative vs. accusative pronouns = EASY. Got it.

But now here’s the rub:

English has ‘object’ pronouns (me, you, him, her, it, us, you [all], them that you saw above) that get used for BOTH the accusative AND dative cases. 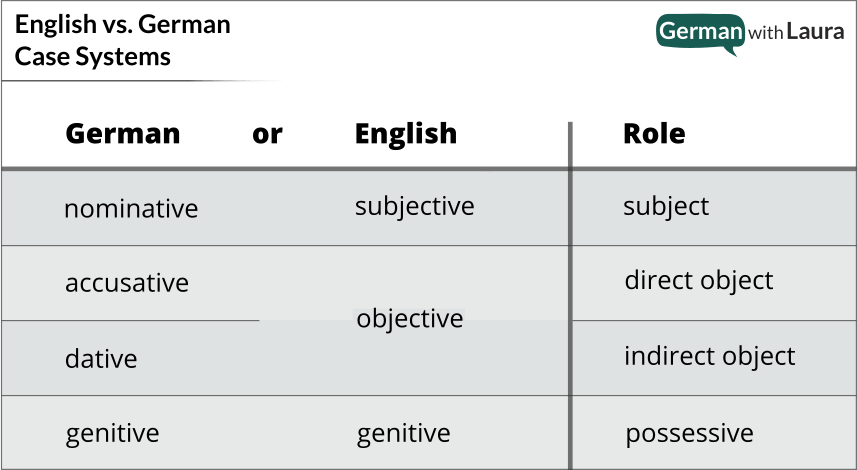 So, in English we have just the one set of ‘object’ pronouns that covers both the accusative & dative cases (which, in English, are collectively called the objective case).

But, to speak German, we have to learn how to make the distinction between accusative & dative. And this difference impacts many words — including pronouns.

Here are the nominative, accusative, AND dative personal pronouns side-by-side: 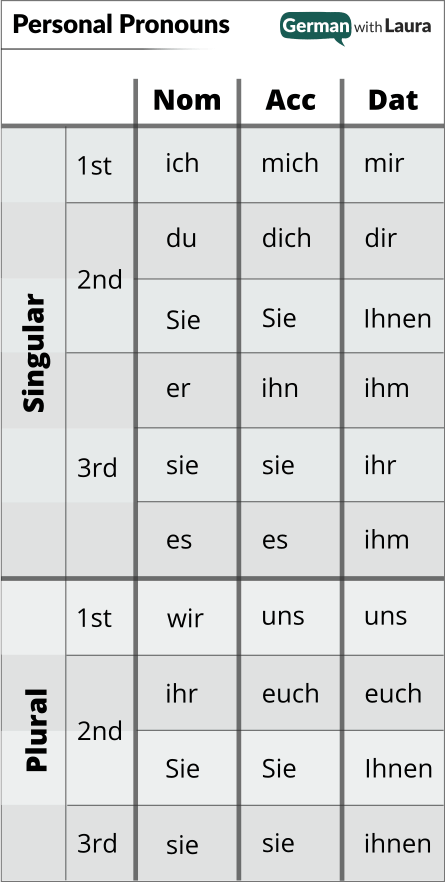 We’ll also suss out areas of common confusion & mistakes so you can avoid those pitfalls!

Section 2: Putting it into practice
When & how to use Accusative Pronouns

When to use an accusative pronoun

How do you know when to use the accusative pronouns vs. the nominative or dative ones?

That’s not so bad! And the key exception to #2 is this: some particular (<– read: memorizable) verbs, adjectives, and prepositions require that the following noun be in the dative case.

Now, look at these German examples of this two-part rule in play (accusative is italicized):

In each of these sentences, you can see:

NOTE: if you don’t understand why there are different versions of the word ‘the’, read my Der Die Das guide!

Now that you understand the basic rule of WHEN to use accusative pronouns, let’s look at HOW.

How would we take those same four examples, but replace the accusative nouns (e.g. apple, mouse, etc.) with accusative pronouns?

How to pick the right accusative pronoun

We have already established that you can assume that the 2nd noun in your sentence is in the accusative case.

The first noun is the subject (nominative case) and then we default to the next noun being a direct object (accusative case).

That narrows down our pronoun options to just those listed under ‘Acc’, but how do you know which one of those to pick?

When you’re first learning accusative pronouns, you will probably think of them with their English equivalents: 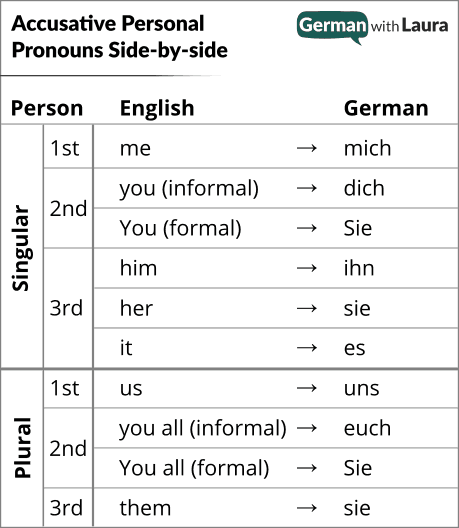 If it makes sense, then you know if you’re using the correct category of pronoun. For example, we can say I see them. But we can’t say I see they (<– that’s a nominative pronoun!).

Hopefully the concept of how to use accusative pronouns when talking about people seems pretty straightforward to you now.

BUT now we need to talk about two extra-tricky aspects of accusative pronouns.

There are a few things about accusative pronouns that frequently trip students up.

We already talked above about the difference between accusative & dative pronouns and general points on when to use which.

But that still leaves us with these points:

Using accusative pronouns to talk about people — her, him, them, etc. — is not so bad!

But sometimes we’re talking about objects (e.g. I buy an apple. I love the pictures).

And this is a bit trickier because German is a language with noun gender — even for objects.

Thankfully, this issue is relevant ONLY in the 3rd person singular and I’ll show you a shortcut for how to remember the different, gendered versions of ‘it’ (keep reading!).

Here are our same 3 example sentences from above, but with the gendered pronouns (‘it’) (bolded) now!

Let’s break down the components for the accusative nouns in our example sentences.

All of these nouns are non-people. In English, we would refer to all of them as ‘it’. In German, we use ‘it’, too — but the gendered forms of it!

This is the part of the pronouns chart we’re talking about: 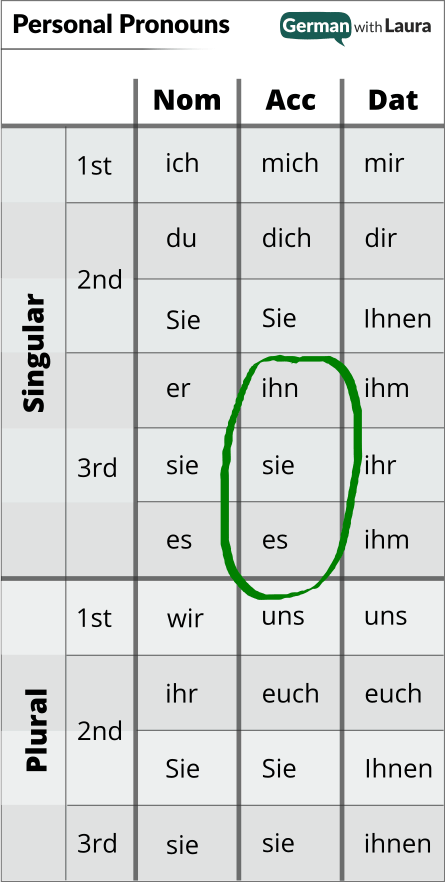 Look at the examples again with their ‘person’ labels so you can see how it relates to the table:

Thinking about needing to use different forms of ‘it’ that have gender is a bit of a stretch for English speakers.

Not to mention that remembering the various ‘it’ pronouns (not just in the accusative case, but in the nominative & dative, too) can feel pretty hard at first.

Good News: I have a helpful tip for you!

If you haven’t had a chance to look at my Accusative Case Guide, I totally recommend that! Understanding more about the accusative case in general will help you will accusative pronouns.

BONUS: it turns out that the accusative case declensions are also exactly what you need to remember the 3 gendered forms of the pronoun ‘it’. Oooh, what’s that about? 😀

Look again at the 3rd Person Singular section of the personal pronouns table and take special note of the very last letter on each pronoun:

Now, look at this accusative case snippet of what I call the All-In-One Declensions Chart:

listed in the chart snippet are the same last letters we see on the accusative pronouns ihn, es, sie, and sie.

You need to have the complete All-In-One Declensions Chart memorized anyway, so it’s great that it does double-duty for you by covering the declensions on the gendered pronouns ‘it’, too (in the accusative ^^ and also in the nominative & dative!)

We’ve talked about when to use accusative pronouns: to replace a direct object (which is the 2nd noun in a given sentence).

You’ve learned how to pick out the right one, too, by learning about the different persons.

The only thing that is left is to dissect our accusative pronouns table one final time, noticing patterns (to help us remember the pronouns more easily) and cutting out material wherever we can (so we don’t have to remember as many!).