When you first start learning German, you realize fast that you can’t get far without learning prepositions.

Prepositions are little words such as with, for, against, to, on, over, under, in, behind, between, through, etc. that we use all. the. time. in both English & German!

Of course, as you’ve probably accepted by now, German prepositions are a little trickier than their English counterparts and for the same reason that is pretty much always behind a German-learner’s woes: the dreaded German case system!

Thankfully, we’ve demystified how to use declensions in the German case system (it’s really not so bad!).

And if you’ve already read my guide on the Accusative Case (which I recommend before reading this guide), then learning German accusative prepositions will be a cinch — there are only 5!

Section 1: The Basics What you need to know to start getting the hang of German Accusative Prepositions

with the long, sharp knife for a poor, hungry boy under many warm, cozy covers over a few grassy hills to some impatient, bossy supervisors

As you can see, prepositional phrases can’t stand alone ^^ — they have to be part of a larger sentence in order to make sense (e.g. This sandwich is …. for a poor, hungry boy).

How do prepositions work in English vs. German?

Prepositions are are one of THE HARDEST groups of words to learn in a new language. Why? Because there are rarely 1-to-1 translations of prepositions.

For example, as an English speaker you might think ‘ok, I just need to learn the German words for to, from, at, etc. — that’s not so bad!’

But the way we use, say, ‘to’ in English might be the German preposition zu … or nach … or auf.

OR ‘at’ used in English might be the German preposition bei … or auf … or in.

Do you see what I mean? Prepositions are not 1-to-1 in English and German.

You have to learn all the German prepositions and how they are used in German — which doesn’t necessarily line up in a neat-and-tidy way with how we use prepositions in English.

Prepositions in English are relatively very simple and we have about 28 common ones:

above, across, against, along, among, around, at, before, behind, below, beneath, beside, between, by, down, from, in, into, near, of, off, on, to, toward, under, upon, with and within

You take whatever preposition indicates the meaning you want, pair it with whatever noun, maybe use a determiner or some adjectives and done. Seems easy (to us, at least).

Turns out there are also about 28 common German prepositions! And only 5 accusative ones. That doesn’t sound so scary.

The 5 German accusative prepositions with their approximate English translations (on a very basic, surface level) are:

durch (through)
für (for)
gegen (against)
ohne (without)
um (around)

Remember: we can’t just pair a noun with a preposition all willy-nilly. Oh no. All German nouns have to be in a particular case. And nouns in prepositional phrases are no exceptions!

Section 2: Putting it into practice
When & how to use Accusative Prepositions

When to use accusative prepositions is a more complex topic than we will tackle in this section.

Sure, you have the provided approximate English translations to get you started … But remember that it’s not often a simple 1-to-1 with English & German prepositions!

It’s far better to pay close attention to authentic German (native speakers, music, movies, books, etc.) and the contexts in which the 5 accusative prepositions are used — that is how you’ll really learn when to use durch, für, gegen, ohne and um!

How to use the accusative prepositions is much more straightforward!

In order to use an accusative preposition, you have to know how to ‘signal’ that your prepositional phrase is in the accusative case and that is a matter of knowing …

How to ‘signal’ an accusative prepositional phrase

If you think of every sentence as having ‘slots’ that get filled up with nouns, those ‘slots’ are the German cases:

nominative (for the subject noun)
accusative or dative (for object nouns)
genitive (for nouns that express ‘possession’, loosely defined, of another noun)

There are prepositional phrases that have to be in the accusative, dative, or genitive cases (none in the nominative case except for the idiomatic was für ein … ‘whatta … [cool guy!]’).

In this guide, we’re focusing on accusative prepositional phrases — so how do we make sure the noun in the phrase is properly marked as being in the accusative case?

It’s all about declensions!

Declensions are just single letters (-r, -e, -s, -n, -m) added to the ends of certain groups of words that come in front of nouns. Declensions are what signal the gender & case of that noun.

This is important because the case of the noun tells us who/what is the subject (or an object), etc. — we need to know who is doing what to whom, etc. in order for a sentence to have meaning.

The gender of the noun isn’t actually important — it’s just that gender is an inherent part of every German noun (there’s not separating a noun from its gender), so it has to come along for the ride and be taken into account when we’re selecting the correct declensions.

There are only 2 categories of words that come in front of nouns (including nouns in a prepositional phrase) and, therefore, need declensions:

Determiners: a, the, some, few, this, etc. that tell us how many of the noun or which one.

Adjectives: describe some feature of the noun (e.g. big, small, round, flat, blue).

All determiners or adjectives in an accusative prepositional phrase will take either the strong or weak declension listed under the gender that lines up with the gender of the noun in the phrase:

)?) is a matter of working with declensions patterns!

There are 4 total declension patterns that help us use the declensions chart properly.

Notice a general preference for strong declensions over weak ones. 😀 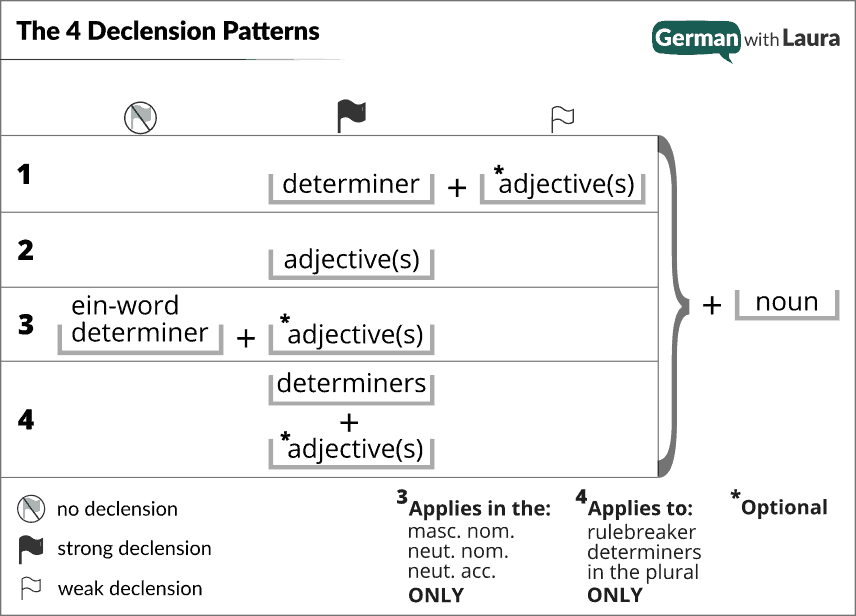 ANY of these four declensions patterns may be used within an accusative prepositional phrase.

Let’s look at examples of each declension pattern along with each of the 5 accusative prepositions!

Again, there are 5 prepositions that are always accusative:

Note that in the following examples…

Learning the 5 prepositions that are always accusative is important because

Doing that successfully is a matter of putting the correct declensions (strong or weak) onto the correct words (determiners or adjectives) so as to reflect the gender [masc., fem., neut., or plur.] & case [accusative] of the noun!